Our opponents started at a fair lick and within 5 mins had hit the bar,been awarded a penalty after a clumsy challenge by Connor Goodliffe. Debutant Johnny Pitts made a tremendous save to his right but within 2 minutes a massive gap appeared on our right hand side and the cross was swept in at the far post by Danny Watson. 0-1.

Crawley kept their tempo up and we had to work hard to stay in the game although Frankie Hercules , had a decent chance with a cross shot after a passage of decent passing. Unfortunately Frankie had to be substituted with a groin injury after 20 mins and Joe Chott was introduced.

We weren't winning enough of the individual battles but after 28 mins a well worked corner routine resulted in a Prince Nimoh cross being headed back across goal by Adam Murphy for Joe Naylor to convert. 1-1

With 2 mins we committed the cardinal sin of allowing another of the strong,experienced front 3 ,Phil Draycott to finish convincingly to restore our opponents lead. 1-2

In truth we were probably grateful to reach the break still in touch.

Playing up the slope we improved with a bit more protection for the back 4 allowing Connor Goodliffe to start to get on the ball and push us forward. We started to compete and slowly forced Crawley onto the back foot, although their experienced front 3 worked hard and looked dangerous.

On 75th min Ollie Butler went on a mazy run just inside our half and having beaten 4/5 players placed the ball wide of the keeper to bring us level. The game then threatened to turn in our favour and Kevin McManus was unlucky with a header which skimmed the bar in the 86th minute.

Unfortunately in the 88th minute a long ball was again our undoing when Connor Blake, who had certainly steadied the ship when he came on as sub, succeeded only in letting the ball skim off his head allowing Sam Holmes to cleverly lob the ball over our custodian. 2-3

When push came to shove our opponents far greater experience at this level made all the difference in what was a decent game to watch in front of a good sized midweek crowd.

As a Management team we are however learning quickly as to where improvements have to be made.

Onto Harefield Utd in the FA Vase on Saturday.

This evening MOTM sponsored by Heygates was Olly Butler. 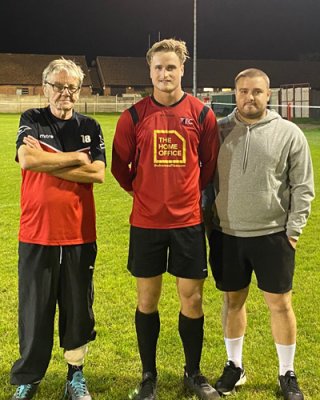