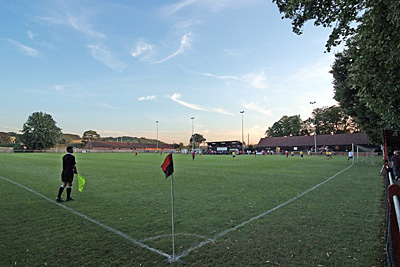 U15 Youth Team
Sun 23rd Feb 2020 10-30: Away
League match versus Hitchin Town Youth
Results
First team
Tue 11th Feb 2020 Spartan South Midlands Premier Division
North Greenford United 2-1 TAFC
First of all my congratulations to all those at NGU for all their hard work in getting the pitch ready, although it was marginal with large sanded areas especially on the edge of the penalty area at the Clubhouse end. As ever the hospitality was up to the usual high standard at this Club. We kick... [full report]
League table

Returning Players (posted Thu 6th Feb 2020)
The club would like to welcome back Connor Blake from Leverstock Green, Kevin McManus from Biggleswade Utd and Les-Obua-Barkers from Leighton Town.
We would also like to thank their respective clubs for their prompt and obliging action over these moves.

Managerial changes (posted Thu 6th Feb 2020)
Due to recent events. Chris Juraszek and James Shaw have stepped up to manage the First Team. Cliff Hercules will assist with the Reserves as well as running the midweek under 18 side. They will be assisted by two or more of the volunteers who have come forward with offers of help. These will be announced shortly.
Chris can be contacted at: chrisjuraszek49@gmail.com or mob. 07737 408121

Further information (posted Wed 5th Feb 2020)
Club reclaimed for local community.
Several measures have been taken to reclaim our football club to it's original identity.
This includes removing several individuals from the club who were instigating a hostile take over bid with the aim of removing the current committee who have built the club from a shed in Miswell Lane to the facilities we now have and own.
In recent times, we acknowledge the club has moved away from our aims of providing football for local players who supporters could identify with. The club has pledged to correct this misdirection.
This will allow l...more

Club Statement (posted Wed 5th Feb 2020)
Due to a hostile attempt to take over the running of the Club by a group of individuals, including some former committee members, the Committee have removed several persons from within the Club with immediate effect. This includes the First Team Manager and his staff and a number of the 1st Team squad. We hope that all supporters will continue to remain loyal as we fight to overcome this attempted takeover. Some members have received correspondence not originated by the existing Club Committee and this should be ignored with any questions directed to the Club. A further statement will be issued in due course

As you may be aware, Howard Wells has resigned as Chairman of the Club. The club would like to place on record its thanks to Howard for all his efforts during his time in the role.

As a result of this resignation, the Club needs to convene an Extra-ordinary Meeting. In complying with the Clubs Constitution, sufficient members have submitted a letter to the Honorary Secretary requesting such a meeting.

In order to optimise the use of the car park, and ensure members are not impacted by inappropriate parking, Pendley Sports Centre has decided to implement controls whereby cars must be parked within a marked parking bay.

Failure to park within a marked parking space risks a fine being issued by the parking control partner CPM Ltd. There is now clear signage around the car park that explains requirements and penalties.

1st team Player of the Month

Nov 2019: Luke Dunstan (in association with John Lambert Car Sales & Olives Limes)
It was a delight that Luke Dunstan won our Player of the Month Award for November. Luke has well over 200 appearances for the club, coming up through our reserves to be a vital, driving force in the first team's mid-field over the past 2 to 3 seasons. He is maturing in to a fine, local talent and fully deserves this Award.