A bullish display was needed at Cow Lane and goals needed to be scored to restore some confidence after the heart breaking result against Alvechurch on Saturday, and in this respect the team did not disappoint, with two goals in each half against a spirited Tring Athletic, who, like Hitchin have been in the nether regions of their respective League.

Tring, who had a creditable win at Cockfosters recently, impressed with some excellent defending and came close to scoring on a couple of occasions. They have been having an awkward time in the Spartan Premier division, and they were holding out at 2-0 down until the last five minutes and despite the score they may well feel that they were unfortunate at conceding late goals after such notable defending.

I was delighted to make a return to this friendly club that I knew so well in former days, where I witnessed many a battle with Dunstable Town in both league and cup games. Tring have excellent new floodlights and next season they are having a 3G pitch installed which will enhance their status as a community club and, it is hoped bring in some useful funds. The clubhouse also boasts a smart improvement and I was pleased to be remembered by a number of officials and supporters.

Another change was their home strip which was a frantic swirl of red and black, with a yellow patch attached proclaiming that The Home Office was a sponsor, but I dont think it is THE Home Office. Hitchin were in all green and there were some predictable changes to the line-up. Ryan Smith, Stan Georgiou, Jack Green and Steve Cawley started and Josh Coldicott-Stevens came on as a substitute, as did Delsin Ackom.

Lewis Barker seemed well up for this one and seemed ubiquitous in the early stages, showing a creditable hunger for the ball. Hitchin were soon going forward as expected and after just five and a half minutes, Barker notched the first goal from a lofted pass. How he would like such freedoms of movement in the Southern League. More attacks followed and were carefully defended, and Hercules, son of the well remembered Cliff Hercules, was showing good skills.

I was amused that the referee made an early booking of John Smith. Whats your name, son?
John Smith.

Dont mess me about son, whats your name? I speculated at what possible suspicions this fellow will be subject to when he books into a hotel with his wife.

Callum Stead was eager to bag a couple of goals or so tonight, and had the forward passing been a little tighter he would possibly have achieved this, but he had to be content with just the one, late in the second half.

Barker had a superb effort where his lofted ball landed on the roof of the net and had he scored he would have dined out on that one for at least a fortnight. Dasilva was lively and he too had the late reward of a goal. Cawley was also eager to make his presence felt and he managed some of his trademark touches and flicks.

Tring tried to get forward, and a cross from the right saw Horlock intervene smartly. But they battled well, with good work from Bonner and Sawyer.A Hitchin cross was neatly intervened by Bonner, who tried to get things moving for his side, but Hitchin were the attacking force as expected.

Pitts, in the Tring goal had a lively time but his judgement was quiet sound and he distinguished himself later with some notable saves. I did notice that Mark Burke was a little agitated, warning one of his players that if he did not obey instructions he would be sitting next to me. He did not carry out this threat, which was just as well.

A Tring free-kick wide on the left from Hercules saw Horlock come out to claim the ball. Although ahead, Hitchin were not having it all their own way, and again I will say that they are not used to such freedom on the ball. Stead was a target, of course, but too many passes were too high or too long. After nearly half an hour I thought it necessary for another goal to be drilled home for the sake of comfort and this did arrive, quite stylishly after thirty-five minutes.

Hercules did have a worthwhile effort at close range, but it was fired straight at Horlock. Blunden had a shot that cleared the bar after a fair bit of preparatory play.It was a good spell for the hosts who just could not sustain the momentum. The second goal was netted after Cofee had conceded a corner, taken by Gleeson. Barker had a free header that also met the head of Cawley who flicked it neatly beyond Pitts Nice goal.

Tring rallied with a decent attack that was adequately defended, and Georgiou was steady in anticipatory defence, with good follow-up distribution. Dasilva picked a defenders pocket, but I noticed a slight altercation between Stead and Barker about a piece of play that might have been maximised. Steady on your fellows. What it did show was that the Hitchin players were treating this match with the right level of commitment, and indeed a competitive match is far more satisfying than just training.

Cawleys exchange with Gleeson looked the business but Pitts anticipation was laudable. Jack Green, on familiar ground looked earnest and he looks like he has returned to form. Stead had a shot that was well saved by Pitts three minutes before half-time. It seemed too much for then young keeper who went down and needed his brow mopped after the exertion.

Blacks cross found Stead who steadied the ball but could not get his shot away. Dasilva crossed to early with another chance and we went to the interval with Hitchin comfortably ahead.

During the interval I could not help but remember a previous afternoon visit to Cow Lane, where, in a large marquee, a full orchestra was rehearsing and the ground was filled with such tunes as The Dam Busters March and it added drama to the game and I was perplexed by the Dunstable manager complaining that such a backdrop made it difficult for his players. I found it all good fun, and so far it has been a unique phenomenon.

On another occasion the local rugby club up the road had a big match and the noise of their spectators drowned out the mediocre efforts of our small attendance. No-one could say that Non-League football does not have its memorable moments.

There were substitutions, and not being cognisant with all the rules of this competition, I noticed that Athletic fielded some five substitutes in the course of this second period. Hitchin brought on Josh Coldicott-Stevens and, pleasingly, Delsin Ackom and they both had a lively and productive time of it.
I was particularly pleased to see JCS to return to the fray, hair band and all.
The second half was quite intriguing as it saw Tring really make a go of it, and it was, for them, a little disappointing to concede two late goals after some sterling defending and some creditable attempts to reduce the arrears. What was perhaps a little disappointing was the fact that too many forward balls were ill-judged.

What was good was the creation of realistic chances, with good runs in possession and fine attempts to break down the solid defence set up by the hosts. They were not shy in attack as well, but they. Mostly lacked full penetration. Even so they did cause a few problems, with Hercules unable to do much with his half-chance.

I was impressed with the sound defending of Tring substitute Stevens whose intervention was crucial on more than one occasion. They did have a good chance following a corner, but the Hitchin defence was equal to it. Stead was a little frustrated with the service received but he did maximise his late chance with some degree of aggression.

It did occur to me that if the hosts did manage to score it would intensify the appeal of the game and test the visitors. They had a decent free-kick which Horlock held and this led to a short period of stroking the ball around before renewing the direct attacks. Cawley flicked Dasilvas pass wide, and its was one of many that were finished in like manner.

I think that the fact the both goals this half were so late shows just how dedicated to duty were the Hitchin players. They needed to boost their confidence with a solid display and Tring made them play every minute with full concentration. Pitts made the save of the game following a blistering shot from Stead.

The third goal was an apt reward for Dasilva, which came after eighty-nine minutes and finally, Stead slotted home in stoppage time. Tring just seemed to run out of steam, but the score gave more respectability to illustrate the difference between the sides, but did see a little harsh on the hosts.

Hitchin will be thus fortified for their visit to Barwell on Saturday and we wish Tring all the best in their forthcoming cup tie against Saffron Walden, and, of course we hope to see them gain some points in their league games. 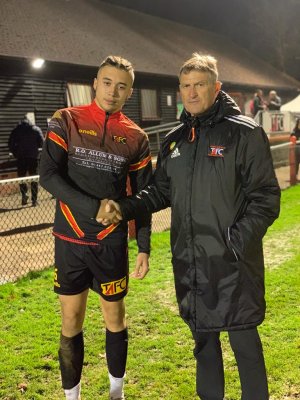