Two minutes into time added on we looked destined to clock up our 5th draw of the season. Not exactly a disaster but another missed opportunity to catch up with the teams above us in the table. Then debutant Adiel Mannion struck to claim a very late winner to send our supporters home with a smile on their faces.

The extra 2 points meant we jumped above Dunstable Town, Crawley Green and our opponents Baldock Town on goal difference. All four of us are on 10 points with Dunstable Town and Crawley Green having played 14 games, ourselves 12 and Baldock Town 11. Still far from safe but a few more wins could take us into mid-table and hopefully this result will give us a big psychological boost.

Man of the moment Adiel Mannion, formerly with Berkhamsted Town, came off the bench just past the hour mark and looked lively from the start, having a few shots that may not have tested the keeper but were on target.

As the game entered added time most of us would have been thinking about our post match refreshment when from out on the left wing Chris Blunden swung over a cross that found our new signing on the edge of the area. Adiel was surrounded by 3 or 4 defenders but he managed to evade them and slot the ball past the keeper for a dramatic late winner.

It was a touch harsh on our opponents who played well and had their moments when they were the better side. They also some scoring opportunities which they spurned.

We started like a steam train with Kieran Turner giving the opposition right back a roasting and it was no surprise when we took the lead after only 17 minutes. The move started at the back with Harrison Cornick setting Kieran free down the left with a superb pass. Our skipper again evaded the defender before knocking over a lovely cross that Frankie Hercules headed precisely past the keeper. Frankie has now scored with headers in 2 consecutive games and is becoming a cult Tony Hateley like figure in the Club (for younger readers please consult Google). Score 1-0.

We were playing some great stuff but despite a series of dangerous crosses from Kieran we failed to get on the end of them and grab a crucial 2nd goal. As the half progressed Baldock started to get into the game and looked dangerous in attack and in the 30th minute they equalized through Owen Robertson following a break down our right. Score 1-1.

We came close to reclaiming our lead just before the break when Tommy Twelves cut inside from the right wing and struct a lovely shot that hit the bar. HT Score 1-1.

We took a while to get going after the break and our guests had opportunities to take the lead with Finlay Aldridge and Josh Downes forcing great saves from Dave Saunders. Their best opportunity fell to scorer Owen Robertson who was through on goal but sent his chip over Dave Saunders but wide of the goal.

We were not at our fluent best but we showed a lot of character to keep a clean sheet in the second half with George Carbery leading by example in marshalling our reshuffled defence. With time up and an acceptance that at least we would get a point Adiel Mannion struck to make him an instant hero. FT Score 2-1. 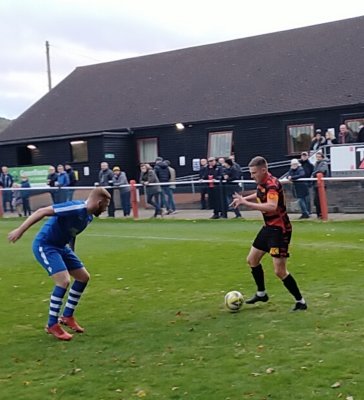