Luke Dunstan drives through the midfield, sends Ashton Campbell through and Ashton chips over the keeper to score. Has my time capsule transported me back to Ian Richardsons side of 2017? No, damn it, Luke and Ashton are playing for the opposition and we are one down after a minute! All we needed to make our misery complete was for Fitzy to have fed Luke but he didnt, thank goodness.

1 0 after a minute. As if our job against the league leaders wasnt tough enough, this made it almost impossible. The perils of conceding earlier have already been dissected in this column this season. You never truly recover and we never got back on an even footing.

Granted, we were competitive for the next hour or so and gave as good as we got. But football is played over 90 minutes for a reason and it is how you fare over that whole period that counts, not just for a portion of the game.

We did have a couple of close efforts, Kieran Turner shooting just wide and Cameron Brookes unable to finish after a mazy run but I cant remember the Leighton keeper being tested.

The last 20 minutes were a best-forgotten disaster. Ollie Butler sent off and then three rather calamitous goals conceded, Ashton helping himself to a hat trick.
Manager Sturges juggled his resources both at the start of the match and during it but, in the end, nothing changed and we seemed to have a few square pegs in round holes.

Due to other results not going our way, we drop to the bottom of the league although this does not feel a true reflection of the season so far.

No respite as we host fellow strugglers Dunstable Town on Tuesday.

Just a final hugely positive note on the off-field organisation on the day. We hosted a crowd of well over two hundred, we accommodated more than 80 cars in The Meadow (thanks to Pendley Manor Hotel), we entertained, fed and watered many of our spectators before, during and after the game. None of this happens without an exceptional group of volunteers. 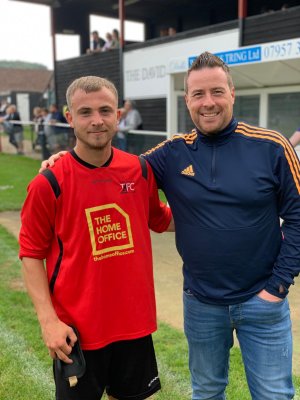