For our season League opener we could have wished for an easier start than Colney Heath, who even with a few changes from last season, still are a big strong side who do what they do well.

Playing down the hill we made a poor start with Paolo Bagatti miskicking a pass and the result was an early cross and unnecessary pressure. We then defended a couple of corners before a mishit clearance from a free kick allowed our opponents to open their account on 7 minutes.

It took us a couple of minutes to recover from the shock, but we got back in the game playing some tidy football we came close with a Prince Nimoh header and a Joe Naylor strike from 20 yds produced a good save from ex Tring custodian ,Matt Evans. Colney Heath then hit the bar with another header from a corner.

The game then settled with Prince Nimoh making inroads down our right,in turn Colney Heath played some good cross field passes to their right side which produced a couple of crosses but no real danger.

Joe Naylor had another long range strike and apart from the scoreline we were reasonably happy as half time approached, although aware that we had the advantage of the slope in the first period.

Again without setting the world on fire we kept the ball quite well although maybe the odd ball in behind would give some variety to our play. After 55 mins Scott Bonner ,who had an otherwise steady game,gave the ball away in midfield. This resulted in a second goal from probably their best player George Devine, who beat David Saunders at the near post having held off our defence.

There was now a literal and metaphoric mountain to climb and in truth,we produced very little while Colney Heath, rightly sat back and played balls into good areas.

After 65 mins subs Connor Goodliffe and Will Salmon were introduced to give us more tempo and we began to get more than our share of the ball. With 15 mins to go Frankie Hercules was introduced and with 10 mins left Connor Goodliffe played a smashing ball into the 18 yd box for Ollie Butler to take a great first touch but having beaten the keeper the ball hit the far post before being cleared for another corner. In truth this really should have been our opener.

The last 10 mins saw our opponents manage the situation to achieve an opening day win.

Thanks to those who made the effort to come and support.

We look forward to Crawley Green on Tuesday night for our opening home fixture. 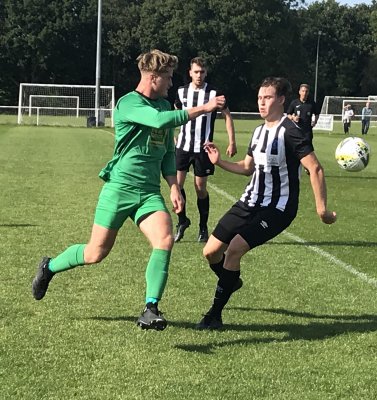