Results > First team > Report
Return
Sat 26th Sep 2020
Spartan South Midlands Premier Division
Arlesey Town 3-2 TAFC First team
TAFC goals: Callum Shortt, Prince Nimoh
On a blustery afternoon in Bedfordshire, the opening exchanges we fairly even with both teams looking to attack. Arlesey looped a headed onto the top of the bar after 5 minutes but Jonny Pitts had it covered. At the other end Joe Naylor looked lively and Daley in the home goal had to be on his toes after 7 minutes getting to the ball first as Naylor chased a through ball.

Midway through the first half a Tring corner on the right was swung towards the far post, Olly Butler nodded it back across goal but Harrison Cornick could only head into the greatful keepers' arms. Will Foley hit a free kick from 25 yards out but it was a comfortable save for the Arlesey keeper.

Tring took the lead on 38 minutes. Running down the left channel, Callum Shorrt looked like he was going to take on the two covering defenders who were backing off. As he got to about 25 yards from goal, Callum produced a sumptuous chip which had the perfect trajectory to fly over the goalkeeper's head and find the back of the net. 0-1.

As the old adage goes, you are always most vulnerable just after you've scored and it proved to be the case this afternoon as Arlesey equalised just two minutes later. Boyen Dimov struck from 25 yards and found the bottom corner beyond the diving Pitts.

With their tails up Arlesey kept pressing and were dominant for the remainder of the half. Their efforts were rewarded on 45 minutes after some nice build up play down the left hand side. Herculano Carvalho took aim from 25 yards, Paolo Bagatti stretched to block, but could only deflect the ball up and over Pitts in the Tring goal. 2-1.

The home side still had a further chance before the break to add to their lead but Carvalho put his far post header just wide.

Into the second period on the hour mark Prince Nimoh had a claim for a penalty turned down, with his heel appearing to have been clipped in the six yard box. Arlesey looked to have put the game out of reach on 64 minutes. Jalen Miller who had looked a threat all game, beat three Tring defenders down the right before crossing for Carvaho to score his second of the match from close range. 3-1

Kevin MCManus headed wide from a corner and Gareth Terblanche whistled an effort narrowly past the post from 40 yards with the keeper beaten. The home side however continue to have more of the play and looked as if they would see the game out.

We were given a glimmer of hope on 82 minutes when Prince Nimoh latched onto a through ball, touched it past the onrushing keeper before rolling the ball into an empty net. 3-2

In the remaining minutes, there were half chances at both ends but no further goals. Another game where we competed well, put in the effort but lacked consistency or quality especially in the final ball or finish.

One final note is to congratulate Olly Butler on his 250th TAFC appearance.

Clink on the video link button for George Bogdans photos and highlights.

You can also watch the goals and highlights on the excellent The Cold End blog here http://thecoldend.blogspot.com/2020/09/carvalho-double-helps-arlesey-town-tol

The following report was taken from Arlesey Town's website:-

Last week was sunny warm and windy this week its autumn and cold wet and windy, good old England.

Arlesey started strongly and really should have netted in just the 2nd min as a bad back pass from Tring, Jalen Miller pounced on it going into the box, closed down quickly it was just about cleared just missing Boyan Dimov who almost got it on the edge of the area.

A series of Arlesey corners eventually found Bruno de Brito whose header was pushed over from hitting the cross bar. A Tring FK was met by Callum Short who was well tackled by Luke Daley in goal just outside the box but a FK was given to Arlesey.

Another good Tring attack was well stopped by Daley at the feet of Prince Nimoh. Tring were pressing a bit now but Daley took the header when it came at him with confidence.

A break from Herculano Carvalho making his home debut found Brito who crossed in for Lincoln Gilmartin to shoot forcing a goodsave from the keeper and another corner that Brito shot over the bar.

On 27 mins A break by Tring saw a slow motion tackle and fall by the forward, with a FK given Manny Richardson protested a little to much for the ref who sent him to the sin bin for 10 mins. Then just a min later captain Adam Randall went down with a muscle injury and had to leave the field, this led to a little reorganisation with young Jack Ellwood showing even more versatility as he went to centre half and Luis Fernandes coming on.

As the game started after the delay Tring capitalised on the temporary gape in the centre as Short attacked and he just beat Daley to the ball at the edge of the area chipping him and the ball dropped just under the bar for a good goal and 0-1 on 35 mins.

Arlesey got straight back to the task and pushed forward as Gilmartin was fouled. This was an easy take for the keeper. Just a min later a break by Carvalho saw him find Dimov on the edge of the area and he fired in a great shot that flew past the keeper and his 2nd goal in 2 games for 1-1 on 37mins.

The game was now warming up as 1st Brito shot just over the bar from a FK and Gilmartin cut in and also fired just over the bar before the goal of the game came as a great close control passing move saw Dimov find Carvalho on the edge, despite a lunging challenge fro the defender Carvalho looped the ball over the despairing keeperinto the net for 2-1 on 44mins and another really great goal.

Arlesey started the 2nd period as they finish the 1st pressing forward and creating chances. A foul on Miller on the edge of the area saw a good shot from Brito and a great save from the keeper, and a good ball put Miller through but his shot just shaved the wrong side of the post. With both sides working hard half chances came for both sides before Miller skipped into the box beating 3 defenders before putting in a cross that Carvalho forced over the line in front of the keeper for his 2nd goal and 3-1 on 66mins.

A break and a great long shot saws great save from Daley showed that Tring werent finished. Changes for both sides slowed the game a little, a good ball over the top saw Miller hit the side netting before on 80 mins a long ball wasnt cleared and as Daley came out Prince Nimoh skipped past him and put the ball into an empty net for 3-2.

Although Tring pressed for the last period of the game Arlesey kept their nerves and saw out the game for another victory to continue the good start to the season.

Another good entertaining game to watch with yet more great goals. Arlesey are now very worth watching and are playing as good and entertaining football as they have for some years. 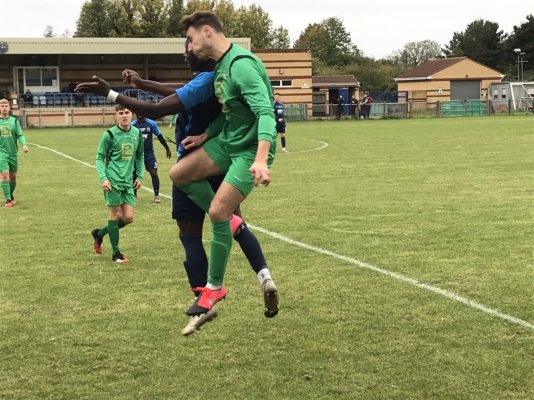 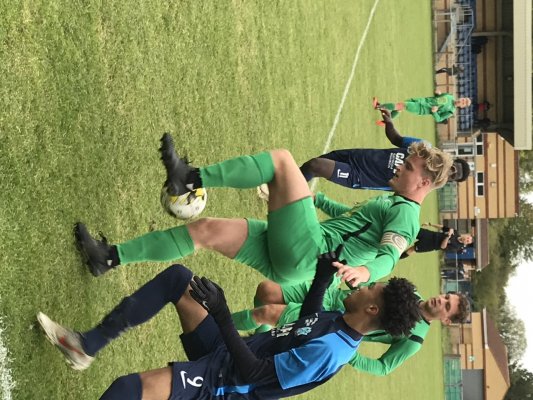