Results > First team > Report
Return
Sat 19th Sep 2020
FA Vase - 1st Qualifying Round
Harefield United 1-1 (5-6) penalties TAFC First team
TAFC goals: Will Salmon
Athletic progress in the FA Vase winning 6-5 on penalties against Harefield. Tring took the lead through a powerful Will Salmon header from a corner before the home side equalised in the second half.

We took another step along the road of turning a young side into one capable of competing at this level. For once we started well and the level of commitment was outstanding especially in the first period. Our opponents with their much vaunted strike force did cause a few scares from set pieces but we in turn created arguably the better chances. Will Foley, on his first start, moved the ball well in midfield and along with Will Salmon's energy they laid the groundwork for Ollie Butler to get at Harefield. Both wide men Prince Nimoh and Joe Chott worked hard helping their defenders and getting at Harefield when the chance presented itself. Joe Naylor up front is improving with every game and was a thorn in their side around the penalty box without maybe getting enough shots off.

The back 4 looked solid as a unit and are improving visibly game by game. Central defenders Adam Murphy and veteran Kevin McManus missed little down the middle and their decision making was excellent. Full backs Paolo Bagatti and Gareth Terblanche were generally successful in stopping crosses and attacked the spaces in front and Paolo especially put in 2 absolute peaches of crosses just missed on the far post.

On 15 minutes a marauding run by Gareth Terblanche and a 1-2 with Will Foley resulted in a strike. 2 mins later Prince Nimoh should have scored but scuffed a left footed shot from close range. On 20 minutes a well delivered corner resulted in Harefield Utd hitting the bar with a flicked header with custodian Johnny Pitts, who,was steady throughout, well beaten.

On the half hour mark, a mazy run by Prince Nimoh earned a corner from which Will Salmon rose like a .... to finish with a powerful header. Ollie Butler then fired wide of the far post and we went in at 1-0 up.

Harefield Utd reacted as expected, but in truth we defended well and broke when we could.

On 65 minutes we conceded from a corner when a player was left free on the far post, but we should have retaken the lead when a Foley delivery was flicked on by returnee Stephen Ebinone (on for Joe Chott) for Adam Murphy to head over. For 10-15 mins Harefield threatened to take charge but our resolve got us through this period.

Harrison Cornick came on to replace Gareth Terblanche who received a nasty cut after being pushed into a gate post.

On 77 mins Prince Nimoh hit the post and on 85 mins was unfortunate with an attempt across goal.

With scores level at the final whistle, Under this seasons rules we went straight to penalties. Ollie Butler and Callum Short (who replaced Joe Naylor) both scored, our opponents also converted theirs. Will Foley who was as good as anybody then chipped over but Johnny Pitts saved his second pen in a week. Paolo Bagatti and Stephen Ebonine both converted as did Adam Murphy. Our opponents then blazed over the bar to allow us to go through to the next round at Edgware on w/e of 10th October.

The proof of the pudding will be in maintaining the upward curve over the next few games.

Thank you to those who came to support.

Tring Athletic opened the goal scoring with a fine header from William Salmon, despite the forward having nobody around him to contest his efforts at the set piece.

Harefields reply came not long after the hour mark, with new arrival Joe Clifton coolly placing to the right of the keeper Jonathan Pitts following Richard Pacquettes nod from a corner.

Despite the best efforts of Jason Shaws men to make the tie a formality in regular time, penalties became the inevitability- with Pitts securing his cup hero status with not only two saves but also netting himself in the shootout.

The result condemned the Preston Park side to consecutive failed bids to reach the First Round Proper of the competition, last reaching the feat in the Invincibles season of 2018/19.

The Hares first opportunity to break the deadlock arrived from Lenny Farhall, who squared a menacing ball first-time across the six-yard box, but was tantalizingly ahead of striking partner Richard Pacquette.

Trings Gareth Terblanche was granted acres of space in order to venture up the pitch in the early phases, and when eventually deciding to let fly had his effort blocked.

Perhaps a more decisive block in regards of ties wider context was that of Gary Edwards undertaking minutes later, brilliantly laying down to deny a possible deficit for his side in the face of a close-range shot.

Further developments of potential game-altering circumstances transpired at both ends of the pitch, with Ollie Butlers claim for a penalty being waved off by officials, all the while Richard Pacquette being denied by the crossbar after reaching to meet Sam Shaws cross.

Jacob Ballheimer remained a constant source of stability throughout, making important interventions in the opening 45 minutes, most notably his commanding presence on set pieces.

Such aerial dominance was eventually found wanting, with the keepers good work undone by poor marking by his teammates, as there was no irony lost on William Salmon leaping to direct home a free header.

Thomas Payne picked up a yellow in wake of a heavy tackle in the closing stages of the first half, despite protests from the away side as Harefield walked into the changing rooms at the break with eleven men but a goal down.

The determined mindset was evident from the start.

Straight from the kick off Harefield had one of their few shots on target in their opening phase of play, with Pacquette linking again with Shaw and setting up to youngster with a chance on goal.

Shaw couldnt re-position his stance and his tame shot couldnt trouble Pitts between the sticks.

Ollie Butler showcased his class while controlling the ball with a deft touch to then play in teammate Prince Nimoh with a looped pass, nevertheless Ballheimer reacted and came out to meet the opposition and charged down Nimoh.

It was the Tring full back Terblanche that departed from the game in the most unfortunate of ways, sliding along the surface but colliding with metal gates on the pitch side.

Terblanche could no longer continue and was eventually replaced by Harrison Cornick after requiring medical assistance that took up a large portion of the resulting added time.

Uniteds patience eventually paid dividends on the hour, after giving Tring a lot to think about at every set piece leading up to the equaliser.

The veteran Pacquette yet again rose above the crowd and aided in Shaws corner finding its eventual recipient in Joe Clifton found at the back post as he had throughout the game who thundered home in the 18-yard area.

The introduction of big man Stephen Ebonine, who netted on his last visit to Breakspear Road while playing for Wembley, couldnt halt the wave of confidence that came over the Hares in wake of their goal.

The Reds pressed for that all important second, leading to Sam Shaws nonchalant side of the boot take that would have sent the Preston Park faithful into raptures had it not sailed above the woodwork.

It was indeed Ebonine who nearly shifted the turntables in favour of Chris Juraszeks outfit, plowing a ball into the far left corner but for Adam Murphy to head it agonisingly wide.

A Nimoh strike that thundered off the bar from an acute angle was the final chance for either side to clinch it in 90 minutes, confirming the dreaded penalties and a painful exit for either of the sides.

Pitts notched his first save from the spot against Pacquette, halting a low driven shot to his right, while set piece taker for Tring William Foley skied his effort.

The keeper could have sealed the affair having taken and converted the fifth penalty, but for for substitute Foday Sesay to calmly power his chance just to the centre of the right of the net.

Harry McCorkell sent his penalty over the bar in the first sudden death spot kick for Harefield after Adam Murphy sealed Trings sixth penalty and progression to the second qualifying round of the FA Vase. 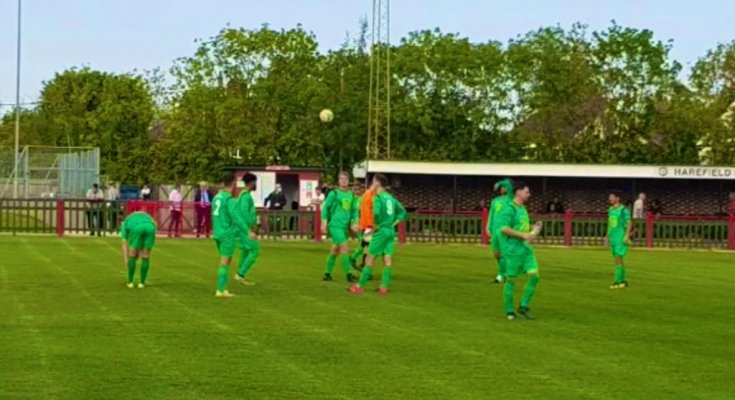